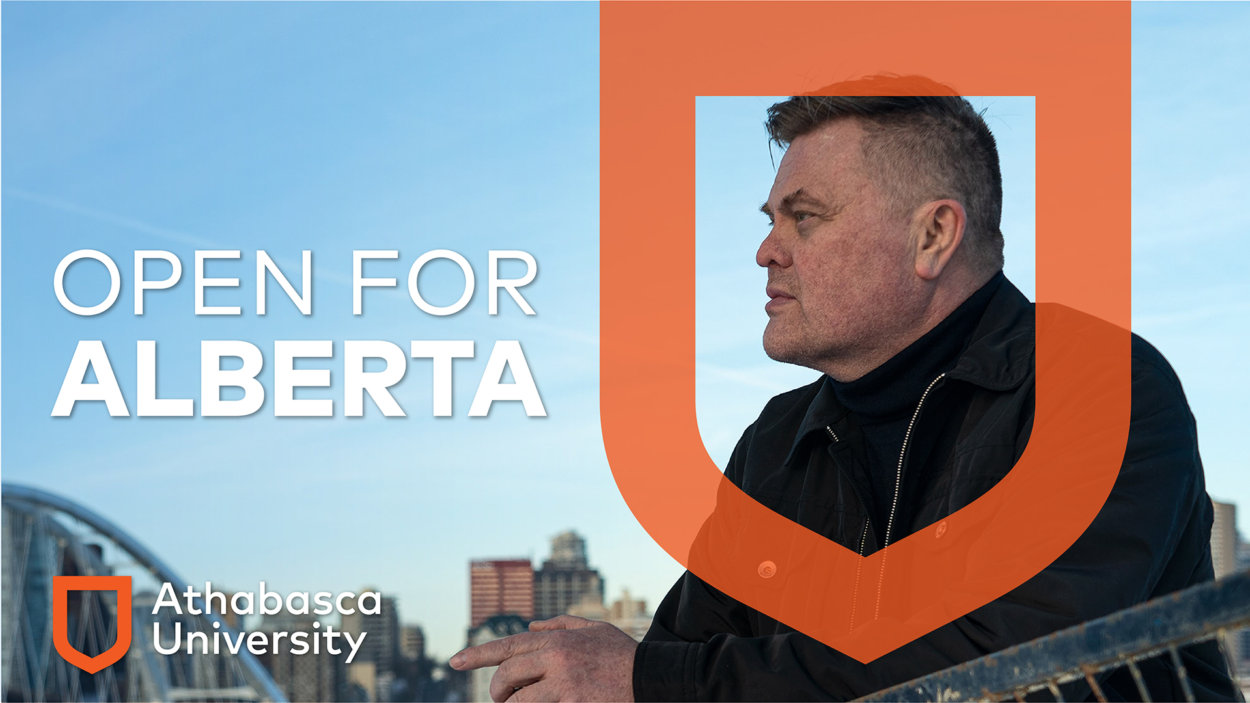 Dr. Wayne Clark has devoted his career to improving the health of Indigenous People by fostering cultural awareness and understanding within the Western health-care system.

The Athabasca University grad is one of the few Inuit to have earned a doctoral degree in Canada. He said while it’s not always easy to integrate Traditional Inuit Knowledge with the policies and procedures of academia, that’s now changing.

“Some of the experiences we have in Inuit communities, and the knowledge we have as a community, is welcome in universities,” said Clark (Doctor of Education – Distance Education ’20). “If we’re able to come and share that, and feel welcome to do so, then we can build that knowledge here.”

Clark’s thesis, which highlights an appropriate way for health professionals to engage with his Inuit community, reflects this. So does his current work as the executive director of Wâpanacahkos—the Indigenous health initiatives program with the University of Alberta’s Faculty of Medicine & Dentistry.

In this role, he works to enhance cultural safety training for medical students, focusing on educating about the colonial experience, the Traditional Knowledge of Indigenous communities, and the power imbalances that can exist in a physician-patient relationship.

Clark lived in Winnipeg while completing his studies at AU and worked as the director of patient services for Indigenous Health for the Winnipeg Regional Health Authority, where he advocated for care plans that recognized traditional Indigenous practices and met the needs of First Nations, Métis, and Inuit patients. He has also served in volunteer roles with national organizations focused on Inuit and other Indigenous issues.

His personal background has roots in Tikiraqjuaq (Whale Cove), Nunavut. He is a member of the Voisey family, and an Inuk enrolled under the Nunavut Agreement.

He earned a bachelor of business administration degree from the University of Winnipeg, and a master of arts in communications from Royal Roads University. His career has included program management roles in Indigenous health and research, communication, and culture.

It was through his professional and volunteer experiences working with Inuit organizations and in Inuit communities that he developed the idea for his thesis. He has extensive volunteer experience with organizations focusing on the health of Inuit and Indigenous communities, and it was in part through this work that he was inspired to pursue a doctoral degree and focus his thesis work on the idea of Inuit cultural safety.

“It is possible to get a degree through distance education when you’re living in [northern communities].”

While attending an international conference on circumpolar health in 2018, Clark said he spoke with well-known Inuk Elder Levinia Brown. As part of her keynote address, she said Nunavut needed more Type 2 diabetes education and training to help control the disease, which was becoming more prevalent among the Inuit.

He realized shortly into the process of conducting his research, however, that his focus was on cultural safety rather than on diabetes education, specifically.

Clark’s research study used storytelling to inform the development of an online module for the provision of Inuit cultural teaching, using Type 2 diabetes as an example. The result is a document for medical professionals and researchers that highlights what a respectful process for engagement with his Inuit community should look like.

“If somebody was doing Inuit-specific research following an Inuit research methodology, there would be specific guidelines in place, and an understanding around the cultural protocols, and ensuring that research engagement was done respectfully and in a manner in keeping with an Inuit way of life,” he said.

This idea of cultural safety is also a big focus in Clark’s current role at the U of A.

One example he spoke of is attending a Sweat Lodge with Cree Elders and medical students, and the impact it can have to simply take part in and be aware of these cultural practices.

“When these med students were learning this, and talking about it afterward, they were saying how enriching it will be when they’re seeing Cree or Anishnaabe patients to be aware of some of these traditions and their significance to their overall well-being,” he said.

Clark said there is also much to learn about practising medicine in First Nation communities just from the administrative side, because health care on First Nations falls under the purview of the federal rather than the provincial government, so specific knowledge is needed to effectively work within those two systems.

“And mental health is probably one of the next domains that’s going to end up having specific Indigenous criteria for developing education and interventions,” he said.

While Clark has seen success throughout his career, earning many accolades along the way—including AU’s 2021 Distinguished Alumni Award—there are several accomplishments in the area of Indigenous cultural safety that to him are the most significant.

When the COVID-19 pandemic hit, Clark was part of a team that quickly developed an identifier that allowed Manitoba Health to track Inuit in Manitoba, either as residents or Inuit coming south for patient care, in diagnostic tests—similar to identifiers used to report the total number of tests conducted and positive results to First Nations within the province.

“It’s phenomenal, because with that method in place, it’s possible to consider how Inuit identifiers can be leveraged in other parts of the health-care system, and for Inuit organizations to access data for what they need to know,” he said.

The message Clark said he hopes to carry to others through both his professional academic work and in earning this award from AU, is that it is becoming easier to incorporate Indigenous perspectives into academic work. He hopes other Inuit will be inspired to pursue their own education in a way that respects and reflects their culture.

“I want to carry the message of post-secondary opportunities to Inuit who live in northern communities,” he said. “It is possible to get a degree through distance education when you’re living in these locations.”

Next Story Building business acumen in service to community

In Our Communities | Research |

On the line: business education in the digital age