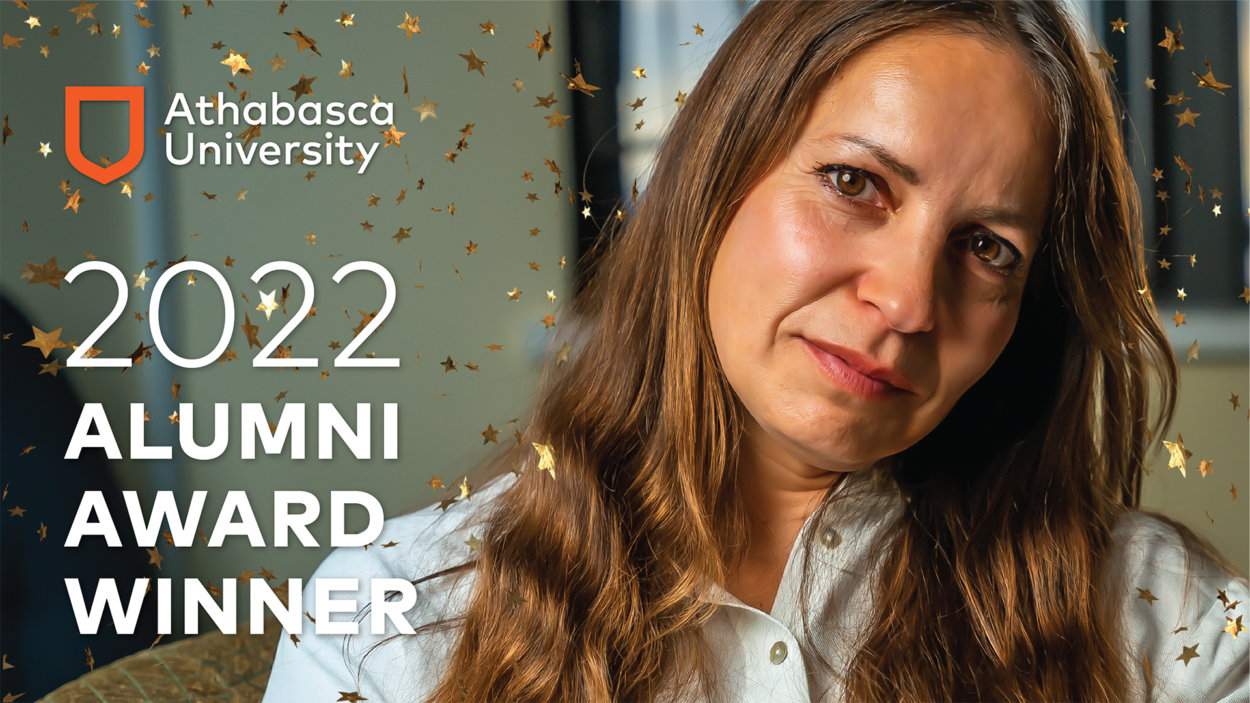 There are many reasons Maria Skordaki (Doctor of Education ’17), the Athabasca University (AU) 2022 Distinguished Alumni Award winner, does the important work she does.

As director of the Green Team at the Royal Military College of Canada (RMC) in Kingston, Ont., which falls under the Department of National Defence (DND), she leads a team responsible for improving operations and reducing environmental impact for military infrastructure right across the country.

But the main reason Skordaki does that work is simple: she worries about things like water quality on military bases so that the members serving their country don’t have to.

This attitude is inspired in part by thinking of her grandfather, a Greek man who served in both the First and Second World War. She said he didn’t speak often about his experiences in the wars, but she did hear some stories. In those days, soldiers didn’t spend much time thinking about water quality.

“They would drink whatever they could, wherever they found water,” Skordaki said. “So that’s something that whilst I’m working on military bases, and see the needs there, I just feel that I want to help out.”

Making an impact at the RMC

Skordaki first got involved with the Green Team nearly 20 years ago and took on the environmental chemistry arm of the organization, shortly after completing a master of science degree under Dr. T. Kurt Kyser at Queen’s University Facility for Isotope Research.

The team has grown and seen some remarkable successes in that time. It assesses different aspects of military infrastructure for the Canadian Armed Forces (CAF), including things like water/wastewater treatment facilities, soil landfarms, firing ranges, greenhouse gases, and energy usage all across the country—from Comox, B.C., to Goose Bay, Nfld., and Alert, Nunavut.

Looking at a water treatment plant, for example, the team might determine the same safety levels for users can be achieved with a different treatment process that has lower long-term risks for the consumers, is more efficient, or has a reduced impact on the environment. Based on that information, they would optimize and refine the process, then communicate those changes to facility operators.

Skordaki became involved first in an unofficial capacity; she had colleagues from her time at Queen’s and through subsequent research-assistant roles who were involved with the team, and they would sometimes consult her for advice.

As the team grew and took on bigger jobs, she sought to become involved in the project on a more permanent basis and was hired, looking at the chemistry-related impacts of military infrastructure like effluent management, water/wastewater treatment plants, and firing ranges.

In those early days, the team with Dr. Nicholas Vlachopoulos had won the Assistant Deputy Minister’s/Chief of Defence Staff Innovation Award for the work they did. Skordaki said since then, the DND’s ongoing support has been fantastic, as the department is committed to the idea of continuous improvement in its work.

“Let’s dig deeper and consider how these funds could be used elsewhere in our society,” she said. “All this is part of the RMC Green Team’s mandate: building efficiencies. I’m very proud of it.”

An education to help educate and train others

Once Skordaki completed her doctorate at AU, she was quickly promoted to director and has been leading the team for the past 5 years.

The work she does involves taking multi-faceted data that is often complicated and difficult to interpret and turning it into information that facility operators can apply in their daily routines—something she said has interested her for her whole life.

She was inspired by educators who were able to take the complicated lessons of a science class and make them accessible to students who may not otherwise be interested, including Dr. Maria Economou-Eliopoulos at the University of Athens Greece, Elias Polychronopoulos, and Helen Spathaki.

Skordaki put those skills to work early in her career. After earning an education degree from Trent University, and with the generous encouragement and support of Dr. Deborah Berrill and Caroline McNamara, she spent a few years working as a substitute high-school science teacher before becoming involved with the Green Team on a full-time basis.

Those skills are also crucial in her current role, which includes a very significant training component. Specifically, as processes are assessed and refined in various military facilities, it’s important to be able to communicate to operators about the importance of the change and how to apply the information in their daily routines.

“We need the human aspect to take the data and make it useful information for someone, so they can relate,” she said. “It has to be communicated in a way that it can be applied not tomorrow, not today, but yesterday, especially for the military.”

“In my doctoral thesis, I looked at how we become filters of our own information and we pass it on to someone else. We become a filter for that person, and especially for scientific information, that can be crucial.”

Finding success with an AU degree

Shortly after joining the Green Team, Skordaki knew she wanted to pursue further education to support her in that work. She had heard about AU from colleagues—many serving military members find AU’s flexibility allows them to get an education while continuing to work full-time. She found that same flexibility allowed her to do the same while refining her understanding of how we share information and teach others.

“In my doctoral thesis, I looked at how we become filters of our own information and we pass it on to someone else,” she said. “We become a filter for that person, and especially for scientific information, that can be crucial.”

Skordaki quickly realized another advantage her AU experience provided. She developed a greater understanding of the opportunities and challenges distance education can provide and has been able to incorporate those lessons as she and the team develop online training and information sessions for staff who may be in similar roles in different parts of the country.

She saw how effective her AU supervisors, Dr. Rory McGreal and Dr. Susan Bainbridge, were in reaching and supporting her as an online doctoral student, building online communities with other students and researchers, and essentially maintaining the dialogue within the online learning environment.

Skordaki’s future plans are all in line with her role leading RMC Green Team, as well as continuing to support her graduate students at the Department of Civil Engineering, RMC and School of Environmental Studies, Queen’s as Adjunct Faculty — she hopes to continue building bridges and building relationships with diverse groups spread all across the country.

“I want to help connect the people who seem to be different because they have different routines and different environments,” she said. “They also have similarities, and hopefully that can percolate through all other sections in the DND.”

In collaboration with Dr. Nicholas Vlachopoulos, Dr. Geoff Pond and other faculty and researchers at the Royal Military College of Canada and Queen’s University, she hopes to further develop the Military GeoWorks Lab, a research sub-group of the RMC Green Team that uses state-of-the-art technology and lab equipment in order to address the environmental and infrastructure needs of the CAF.

She said choosing AU for her doctorate was one of her best decisions, both professionally and for her family. But it was also a decision that involved becoming uncomfortable—she had to transition from traditional, on-site schooling to entirely online learning—and growing into new, diverse and potentially more effective routines. This has helped her to broaden her own horizons, and she wants to be able to share that with others.

“Choosing to become a little uncomfortable, and learn how to find your pace again, I think it’s worth it,” she said. “Especially if it’s for water quality, which I’m so passionate about.”

Next Story Volunteer service a personal passion for Marilyn Kingdon

Alumni | Faculty of Health Disciplines | In Our Communities |

Alumni | Announcements | In Our Communities |