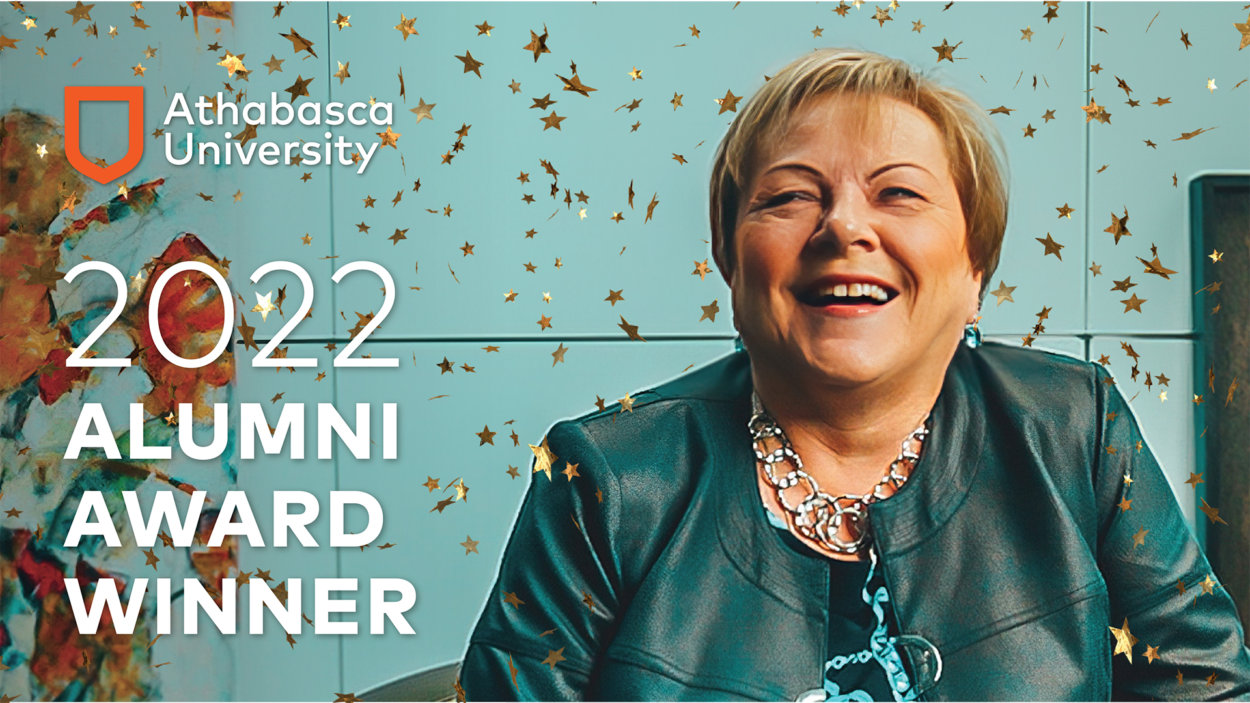 After experiencing hearing loss while attending college, Marilyn Kingdon was driven to support others experiencing the same. Her efforts have earned her the 2022 Volunteer Service Award.

If you ask any dedicated volunteer what they get out of the experience, you’re likely to hear that the volunteer gains more than the organization they’re helping.

For Marilyn Kingdon (Bachelor of Professional Arts ‘17), Athabasca University’s 2022 Volunteer Service Alumni Award winner, this is especially true. Although she has volunteered with many different organizations, much of her work has been with the Canadian Hard of Hearing Association (CHHA)—a cause that hits close to home.

Having suffered from hearing loss herself and having a sister and mother who were both born without hearing, she knows first-hand the kinds of impacts it can have on a person’s life.

“I’ve been involved with the organization for so many years because of that, that passion and just wanting to provide what I could to make the world a better place for all of us, so that hearing loss becomes something that is not so invisible any longer,” she said.

“My parents led by example, in their service to others, because they were involved in local community organizations. And being from a farming community, they were always willing and able to help other families in need in the area. ”

Volunteering with an impact

Kingdon got involved with the CHHA more than 3 decades ago when she was in Toronto, Ont., then moved to Edmonton, Alta., in the early 1990s and helped launch an Edmonton branch.

After retiring from a career as a governance specialist in 2018, she looked to get more involved at the national level and served as the president and chair of the board, participating in countless committees and fundraising events over the years.

She led the organization through some difficult times due to the COVID-19 pandemic and some internal challenges with CHHA. At one point she served as both interim executive director and chair of the board, covering both a governance and operational role at the same time.

In that time Kingdon supported the revitalization of the organization by amplifying the voices of the nearly 4 million Canadians who suffer from hearing loss. She also implemented a mentoring program to support those who are experiencing hearing loss and developing a youth leadership program to help integrate Canadians with hearing loss into the workforce.

To complicate things, her term ending in May 2022 covered the first 2 years of the COVID-19 pandemic—a time that was challenging for people with hearing loss, and also for the non-profit sector as a whole. The organization did earn some well-received publicity around the impact masks have on those with hearing loss with the Share Your Smile Campaign.

“We looked into how to make life easier for people with hearing loss and connected with a company that made clear masks, so that you could see the speaker’s lips. And so, we did a lot of publicity,” she said.

Kingdon’s passion for volunteering was inspired, at least in part, by her rural Saskatchewan upbringing and the values instilled in her: humanitarianism, honesty, integrity, and community service.

“My parents led by example, in their service to others, because they were involved in local community organizations,” she said. “And being from a farming community, they were always willing and able to help other families in need in the area.”

Kingdon also came to understand, from a very early age, the impact of hearing loss as both her mother and sister were born without hearing. Without assistive technology, it fell to her and the rest of the family to support her mother and sister, including helping translate when required.

It wasn’t until she was 17 years old, when she left home to attend a business college in North Battleford, Sask., that she began to experience hearing loss herself.

“Why I wasn’t born with it, I have no idea, but it became apparent when I was in college. It was a difficult time. You’re angry, you’re depressed, you’re frustrated, and you begin to withdraw into yourself,” she said. “Despite all that, I persevered.”

Having her mother and sister to lean on for support was invaluable, she added, and that in part inspired her later work developing a mentorship program with the CHHA. With that support she moved to Calgary, Alta., where she met her husband with whom she had two children.

“Why I wasn’t born with (hearing loss), I have no idea, but it became apparent when I was in college. It was a difficult time. You’re angry, you’re depressed, you’re frustrated, and you begin to withdraw into yourself. Despite all that, I persevered.”

After business college, Kingdon wanted to take her career in a different direction and attended a paralegal training program.

She said she was the first hard of hearing student that program had had, and the supports available to her were minimal; she had to share a single assistive listening device with another student, as the school only had one available. If the other person forgot to return it, she said she was “out of luck.”

Not one to shy away from a challenge, she pressed the school on the issue and the administration purchased a second assistive listening device for her to use. She completed the program and had a successful career in the field.

But another piece of assistive technology had recently been developed and was making a real impact for those living with hearing loss—cochlear implants. Kingdon said while some in the deaf community have shied away from this type of technology, she had had the experience of hearing and was eager to explore the opportunity to regain her hearing. She had reached the point where hearing aids no longer really helped. She has no regrets about that decision.

When Kingdon began her degree program at AU, although she was able to hear much of what was said to her, it was not always easy to understand things spoken in accents in course material, or words spoken in a large crowd. She worked with AU’s Accessibility Services team to get closed-captioning included in her course materials, and strongly advocated for the Convocation team to include closed captioning at the event in 2017.

Closed captioning has been provided at every AU Convocation event since then—what she jokingly refers to as “the Kingdon Rule.”

In just a few short years, she said she has seen significant improvements in how AU course materials are delivered, to the point where as she works on her Master of Arts – Interdisciplinary Studies, she no longer feels the need to work with Accessibility Services since the kinds of accommodations she needed, such as closed captioning, are now just offered by default.

“They’re going to get themselves out of a job if they keep doing the good work they’re doing,” she said.

A passion for volunteering

In addition to the benefits Kingdon’s work with CHHA brings in terms of her personal connection to it, she said volunteering has had innumerable benefits in her life.

These include meeting great people, working towards a common goal, seeing others succeed and helping them to do so, helping contribute to a world of inclusion and advocating for change, developing her skills, and building self-confidence.

“The most important thing you have to give is your gift of time,” she said. “It makes me feel good, and it does my heart good to know that I’m making a difference in my own small way and creating a spirit of community for people who are experiencing hearing loss.”