Words to live By

How one AU graduate — and 2017 Volunteer Service Alumni Award recipient — believed in himself and is transforming communities.

Volunteering is in Anthony’s Montgomery’s blood. He began his service journey back in high school. A lifelong fondness for animals led him to help at local animal-rescue charities. He never looked back.

Soon his target audience moved from four legs to two, when he discovered the same joy helping people at the Calgary Drop-In Centre, and at the Tom Baker Cancer Centre.

He’ll never tire of helping those in need.

In those early days, there were two things he could count on: his abiding commitment to serve, and the fact the opportunities to do so would never dry up.

But there were other areas in his life that weren’t such a given.

One memory, in fact, is so indelible, he’ll likely never forget it.

Academically speaking, it was never a secret — to him or to anyone else — that Anthony learned ‘differently’ than most of his peers. And he was fine with that. His support system was solid. He always knew his value as a person: a loving son, sibling and friend, a hard worker with an inquisitive spirit. Above all, he was someone who always extended a hand to help those who needed it most.

Unfortunately, certain teachers at his school seemed to miss that memo. One of them equated learning differently with being less of a person. At least, that’s how their words made him feel when they advised Anthony not to bother pursuing a career in medicine.

‘Don’t even go there; you’ve got learning disabilities; it’s not going to happen,’ they said, leaving Anthony feeling broken and  belittled.

Insensitive words, however can also be the powerful precursors to greater things.  In Anthony’s case, they contributed to his becoming the even more upstanding, altruistic, thoughtful and bright young man he is today.

Anthony entered Calgary’s Third Academy – a school specializing in special needs education — and came under the welcoming mentorship of social studies teacher Joshua Simons, who basically told him ‘Your middle school got it all wrong,’ and he put Anthony into the high-level applied social studies course.

“He was a mentor. He was the first teacher who believed in me,” said Anthony

But his fortitude was tested again during his undergraduate degree at a Calgary bricks-and-mortar university, where he just couldn’t pass a requisite Introduction to Psychology course  — even after numerous retakes. To make matters worse, even with a diagnosed learning disability, Anthony did not receive the support he needed from the disabilities office at this institution.

Eventually, they shrugged him off. “I was left to fend for myself,” said Anthony.

After some digging, he discovered Athabasca University — in particular, the same ‘Psych’ course he needed.

“I took the one course online. It was phenomenal,” he said.

That latter superlative had to do with meeting Martin Reaney, professional services coordinator of Athabasca University’s Accessibility Services office. After initially meeting Martin over the phone, Anthony knew he’d finally found the support he’d been seeking.

“That was the first time I felt optimistic about post-secondary education and me — just maybe being successful,” he said.

Martin helped equip him with learning supports to help make Anthony’s program more accessible. For example, he helped him to secure a private academic strategist — a support person who could help Anthony organize and put down his “many thoughts” on to his papers.

Martin even helped Anthony navigate the government-funding process (and the accompanying red tape) to help pay for this support. And, he further directed Anthony to the right type of computer monitor to purchase – so that, noted Anthony, “I could have two going at the same time — the outline on one side, and the paper on the other.”

Other accommodations included extra allotted time on exams, and the benefit of a ‘scribe’ to help him with short-answer tests, whereby the person would write out Anthony’s responses, and assist with other assignments, like writing paper outlines. He also developed a tight rapport with this scribe.

All of this essential support was because of AU’s Accessibility Services — in particular, Martin Reaney.

“Martin had a way of reassuring me that I was going to be looked after,” said Anthony.

“I came from a post-secondary institution that didn’t really go out of their way to accommodate me. And then here’s AU that was like, ‘we’re going to make sure you have everything in place to actually succeed.’

“Martin had a way of reassuring me that I was going to be looked after … That was the first time I felt optimistic about post-secondary education and ME — just maybe being successful. ”

It wasn’t long before Anthony saw his first A-plus.

“It was PSYC 395 Forensic Psychology. I got four more A’s after that!” he said. He even got an A in that formerly irksome ‘Groundhog-Day’-like psychology course. Next, he discovered AU’s Human Services program. He felt it would be a nice cap to his volunteer work. In 2013, he officially enrolled in AU’s Bachelor of Professional Arts in Human Services.

A master plan was in the works. Anthony graduated this past year.

Unsure last spring, about whether or not he would show up to AU’s June convocation in Athabasca, his peers at the Tom Baker Cancer Centre quickly hushed his hemming and hawing; he went. He said he’s “really glad” he did.

“The minute I got there, everybody was so very accommodating; they showed me the campus, the library. It was kind of neat to put a face to the name of everybody I’ve dealt with over the phone,” said Anthony.

He credits other AU staff members who impacted his post-secondary wellbeing: senior academic advisors Jamie Gibson and Amanda Boon. This ‘advice team’ was patient, helpful, and treated Anthony as they would any other student – with dignity and respect.

“They helped me with my course selection, telling me, ‘this one may be a good one to take.’ Or, ‘maybe avoid this one because it might a little math-heavy,’” Anthony explained. 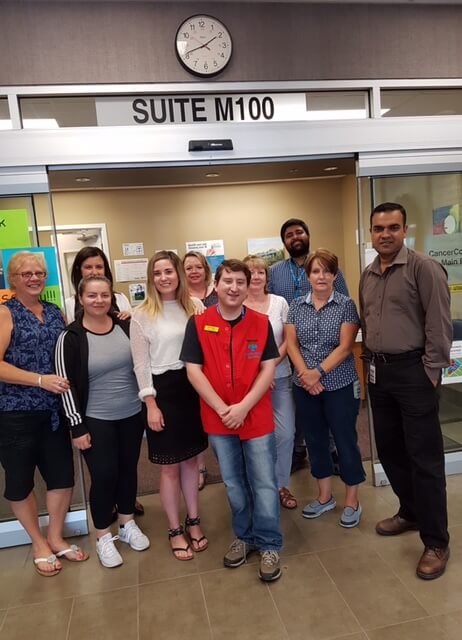 “The minute I got there, everybody was so very accommodating; they showed me the campus, the library. It was kind of neat to put a face to the name of everybody I’ve dealt with over the phone.”

“He started volunteering as a teenager and, for the last four years, could be found, two or three days of the week, at the Tom Baker Cancer Centre, where he provided support to patients receiving cancer treatment, and many other organizations,” said Veronica Thompson, Dean, Faculty of Humanities and Social Sciences.

But especially close to his heart are charities focused on the welfare of animals. The earlier expression ‘in his blood’ is somewhat ironic.

Since 2012, Anthony has served as an event volunteer and ambassador for Four Feet Companion Foundation, a non-profit organization started by his family, that raises funds for local animal-rescue charities  such as the Calgary Humane Society, Meow Foundation, and AARCS (Alberta Animal Rescue Society).

His sister, Daniela, a chartered accountant, is the treasurer, while mom, Mirella, runs the show. Anthony acts as the foundation’s official ambassador. The family hosts regular monthly meetings and fundraising events, from book sales to pub nights. Just last week, they debuted ‘Dogtoberfest’ at the Roosevelt pub in Calgary’s ‘Red Mile’ district, with drink proceeds helping to raise funds.

Anthony’s family is beyond thrilled with his success. He says parents Murray and Mirella, and sisters Francesca and Daniela, have always stuck by him.  “My parents never gave up hope; they always knew that I’d get here one day,” said Anthony.

Today, with a bright future ahead, he says he’d like to pursue a career in the health field — maybe manage an organization’s health department —  like the one at the Tom Baker Cancer Centre. He envisions pursuing a graduate studies program — AU’s Master of Health Studies, to be precise.

Last month, he turned 31. His biggest gift is likely his AU degree. He’s still incredulously reveling in his gratitude.

“There had been so much doubt placed upon me about whether I could get a university degree. Now that I have one, I’m still pinching myself every day. I still look at that degree, on my desk, and I’m like — ‘I actually did it!’”

Q&A with Sandip Lalli, CEO of the Calgary Chamber of Commerce: Inspiring a business community and breaking barriers

Alumni | Faculty of Business | In Our Communities |

AU Accolades! Celebrating awards and achievements of our community