Janet Wilkinson: From learner to teacher

Transforming Lives: Moving Beyond is a testimonial series written by AU students and alumni who want to acknowledge how AU has helped shape their lives.

It’s a space for those who want to thank the people who have helped to support and transform their AU experience to achieve their greatest successes, all while looking forward to their future educational and personal potential.

Their story is worth shouting from the rooftops! Have an inspiring story of your own to share? Email us! We’d love to hear it.

My story about my association with Athabasca University (AU) began when I became a divorcee with a young child still at home.

I had previously attended the University of Manitoba and had taken education. I knew I needed to update myself and fast. I enrolled in AU distance learning courses and graduated with a degree in General Studies in 1995.

An honourary degree recipient and beyond

I attended my graduation, under the red-and-white striped tent, with Maureen McTeer, as the honourary degree recipient. By obtaining this degree, I was able to once again undertake my chosen profession of teaching. By being able to obtain this degree without having to leave my home and family, AU allowed me to succeed. I served on the senate at the University of Alberta for two, three-year terms and really enjoyed receiving the knowledge I gained. I also took advantage of the deferred-leave program offered by my division, and served as the head of my fraternal group for the province of Alberta in 2006-2007.

Since then, I have had numerous international appointments and continued to be involved in volunteer groups in my community. I was involved in the Alberta Teachers Association my whole career as a teacher. I held many executive positions and was the local president when we went out on strike. 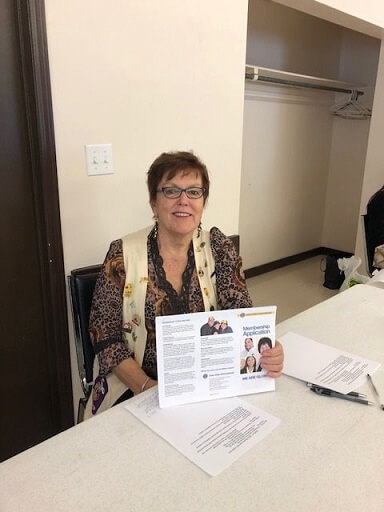 “By being able to obtain this degree without having to leave my home and family, (AU) allowed me to succeed.”

A lifetime of accomplishments

I pushed through and graduated with a Masters Degree in Teaching and Learning from the University of Calgary in their first cohort of distance-education students. I continued to teach and became a vice principal.

I was fortunate to travel to Ghana, West Africa and work with teachers for three different summers. This was organized by the Canadian Teachers Federation. I also worked in Belize for two summers with Belizian teachers which was organized by the Rotary Club. I ran to serve as a Town Councillor in 1995 and served a three-year term. I ran again and am now part way through a four-year term. I have gained so much knowledge by serving on various committees. I currently chair the Evergreen’s Foundation, whose mandate is providing affordable housing for seniors and others in our communities. I feel my future looks bright. I continue to travel, work on interesting committees and serve on volunteer organizations all of which is possible because I had (AU) which helped me get on my feet and realize I still could be a capable individual. Thanks for being there. AU has transformed my life as I was able to support myself and my family through gaining an education. Life is a gift and AU has given me a good one. It isn’t over yet—let’s go for 50 more!

Janet Wilkinson is a retired teacher and administrator and a current town councillor in Edson, Alberta. She graduated from Athabasca University with a degree in General Studies and went on to receive a Masters of Teaching from the University of Calgary. Some of her hobbies include politics, walking, and reading.

Previous Story Samantha Russell: Expanding her horizons, ahead of schedule!

Next Story Angela Grainger: To build a better life

Democracy in action: A student’s perspective

In Our Communities | Learners |

Learners | Words to the Wise |