Rocket science is the easy part

Canada was gripped with Star Wars fever in 1977 when the first movie was released in theatres.

Athabasca University (AU) Faculty of Business student Stefanie Ruel saw it as a child – “I remember sitting in the theatre going, ‘Oh my God, this is so cool. How do I get into space?’” – and parlayed her obsession into a career where she supports Canadian astronauts exploring the final frontier.

Twenty years after seeing the Millennium Falcon zoom around the universe, Stefanie joined the Canadian Space Agency (CSA) to help take pictures of Earth using a famous Canadian satellite called Radarsat-1. Then she jumped into space life sciences research in 2001, leading experiments for astronauts and other microgravity researchers to use. Her experiments have flown on airplanes simulating microgravity, in the space shuttle, and even on the International Space Station.

Stefanie’s days are busy. She has four children and makes frequent trips between Montreal (CSA headquarters) and Houston (where NASA’s human spaceflight program is centred at the Johnson Space Center). She frequently works operations, meaning she has to be available around the clock for when the astronauts need her and her team. It’s in this intense environment that she noticed a need to bring in more Canadians just like her. Stefanie is the only female mission manager in Canada, and she says that has to change. She is pursuing her Doctorate of Business Administration (DBA) at AU to find out why, and what to do next.

“My daughter is adopted. She’s a visible minority. She’s special needs, and she’s a young girl, and she’s brilliant. I don’t want her to be pushed aside if she wants to work in the space industry because she is a woman or a visible minority or handicapped. I’m driven to make a difference for my daughter, and everyone’s daughters. The status quo is not acceptable.”

Her goal is to change the way that women are treated in the space industry and in space operations in particular. She remembers a CSA meeting early in her career where a male senior executive told her she would be useful, because as the female voice she could mediate the all-male group there. She played the role of mediator as she was asked to, but as she grew older she realized and decided that she should and would have a choice in the matter. 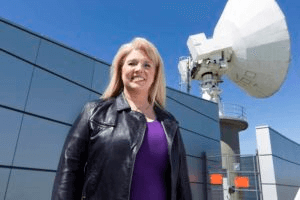 “I’m passionate about my research, and I’m bound and determined to make a difference within this industry.”

At NASA, by contrast, Stefanie remembers an early-career meeting where she walked into a room and saw the table only had women at it. No men. “It struck me at that very moment, ‘Wait a second. I’m usually the only woman around the table. How come at NASA it’s different, and racially, and ethnically diverse, too?’”

Stefanie suspects the reason may be how people talk to each other in the different space organizations. Space is notorious for being full of acronyms and technical terms, but she wonders how much of the language is also biased against women, minorities, and people of different races. She plans a discourse-driven study to see the identities people are forced to assume to make it in the space industry. Her ethics board just approved the study in June of this year, meaning research is at an early stage. She will keep seeking subjects until her study parameters are satisfied, but her goal is to recruit at least 18 to 20 people encompassing men, women, and transgendered individuals of various sexual orientations, and ethnic backgrounds.

“I’m not having any trouble finding people who want to participate,” Stefanie said. “There are a lot of people excited about this, and changing the reality within this industry.” Managing Canadian science in space, Stefanie hopes to have her research finished sometime in 2017, which will help clear her plate again as the next Canadian goes to space. Astronaut David Saint-Jacques is scheduled to lift off from Kazakhstan in November 2018, for a six-month mission, while Stefanie’s life science led experiment is being performed on the International Space Station.

Saint-Jacques will be eligible to participate in “At Home In Space,” which is a psychology experiment showing how astronauts create social culture while working on the space station for at least six months at a time. For example, Canadians will remember astronaut Chris Hadfield’s guitar playing from space; music is one way that astronauts create culture, but there are other methods such as pictures and conversations. That experiment’s operations began in April and will run through 2019.

Stefanie hopes the experiment comes close to the success of her previous space station experiment, called Bodies in the Space Environment, which utilized over 40 hours of crew time. It looked at the pressing problem of why most astronauts see vision changes when they live in space for months at a time. The experiment ran over 2.5 years and more than doubled the usual crew time Canada receives, thanks in large part to Canadian astronaut and physician Bob Thirsk (who did the experiment in space in 2009) promoting it heavily at NASA. Results are still being analyzed. Stefanie adds “it’s an exciting time to be working in space science and space exploration.

The science we do here at CSA is very thought-provoking and adds an immense amount of value to future missions. We will send people to other planets, beginning with Mars, and it’s so fulfilling to know that the science we are doing today is advancing this. From seeing space in a movie as a child, to dreaming about what it would be like to work in the space-science industry, to actually doing it – that is what dreams are made of.”

Ruel finished her Online MBA for executives at Athabasca University in 2011, capping off three years of going back to school while also working full-time. AU’s MBA program was attractivebecause she could do the courses on her own schedule, rather than being required to go to class at a certain time. It was during this time that AU brought in its Doctorate of Business Administration program, which Ruel applied to in 2012.

“My MBA applied thesis supervisor gave me the courage to look deeply at a situation right here in the Canadian space industry, and I thought, I have to pursue this at the doctorate level.”

Again, AU’s culture was a huge factor in Ruel’s application to the DBA program. Specifically, the university is one of the few where AcademicCoaches can be located anywhere in the world. Unlike a bricks-and-mortar university, this allows AU to offer the best research assistance possible to its students.

Ruel is co-supervised by Athabasca University business professor Janice Thomas, who is a leader in project management, and Albert Mills, a management professor at St. Mary’s University, who focuses on the intersection of gender and work. Other committee members are based in Halifax and Finland.

“It’s really a very strong program at AU to open up doors like this, to have the best of the best to help your research go forward.”