Wayne Thomas first noticed numbness in his left foot in 2015. An avid runner, he felt weakness while jogging along Calgary’s Bow River pathway one morning. By the end of the run, he found himself having to drag his foot along just to keep moving.

After the numbness persisted for months, the HR specialist for Alliance Pipeline and Athabasca University MBA alumnus (2014) saw a doctor, who assessed it as a probable back injury.

“I went through 2016 doing all the things you would for a back issue: an MRI, acupuncture, seeing a chiropractor, doing physio, and it wasn’t getting better,” says Wayne. “So I went to another doctor in January of (2017) and he agreed that this didn’t seem normal, and recommended that I have an EMG (electromyography)/nerve conduction (velocity) test.”

By last spring, more tests revealed significant muscle deterioration. Doctors determined something Wayne had not expected – he had a slow-progressing form of amyotrophic lateral sclerosis (ALS).

Wayne, 45, is among roughly 3,000 people in Canada and 40,000 worldwide living with ALS. Also known as Lou Gehrig’s disease, ALS is a rare disease that attacks and kills the nerve cells controlling the body’s voluntary muscles needed for chewing, walking, breathing, and talking. The nerves eventually lose the ability to activate specific muscles, causing weakness and paralysis.

Aside from the five to 10 percent of hereditary cases, ALS’ cause is essentially unknown. The lifespan after a diagnosis is, on average, two to five years – with some exceptions. Perhaps the best-known case of someone living with ALS is physicist Stephen Hawking, who was diagnosed more than 50 years ago. 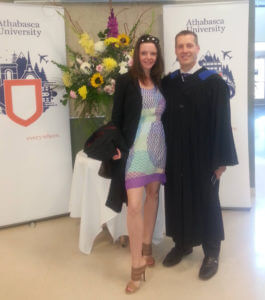 “This is an opportunity to say I have had a great life so far, and anything I do going forward will be a blessing. Hopefully down the road they will find a cure; it may or may not be in my lifetime.”

Wayne, who now uses a cane, counts himself fortunate his is slow progressing, and is seeking out treatments to further slow the disease. This fall he and his wife Joanna Owens will travel to Japan where he’ll spend five weeks at a state-of-the-art clinic outside of Tokyo, for infusions of a drug not available in Canada that was originally targeted at stroke sufferers, but which has seen success with ALS. Recently approved by the FDA, marketed under the name Radicava (also known as Edaravone), Wayne is looking forward to also meeting the drug’s creator.

Along with a regimen of ALS medication Riluzole, Wayne is hopeful the pairing of the drugs could increase his lifespan and slow the ALS’ progression by up to 53 percent, buying him more moments with his wife, family, and friends during which he plans to “live life to the fullest,” he says.

But the drug infusions don’t come cheap. Wayne notes that while his career trajectory has afforded them, delivered on a 10-days-on, 14-days-off basis, not everyone can access the life-saving medication. Not covered under Alberta’s heath care plan (nor most provinces), infusions net $225 a day, plunging annual costs for ALS treatment at upwards of $30,000. The infusions in Japan are an additional $10,000 a year, plus infusion and travel costs, he estimates.

Meanwhile, the nature of ALS often requires those living with it to require extensive retrofits to their home, and wheelchairs and wheelchair-accessible vehicles. None of these costs are covered by provincial healthcare plans and run into the tens of thousands more in expenses.

Wayne is hoping that sharing his story will help shine a light on ALS. “It’s a severely underfunded illness, and because it’s so rare, the research hasn’t taken a lot of steps. In the last 10 years we finally got Edaravone, and now they’re starting to make advancements in other drugs. People need to support the ALS Society in their home province and help get government backing and funding for it so they can make some advances at least.”

In addition to their stint in Japan, Wayne and Joanna are planning a trip to Europe next spring, Wayne plans to “savour life more and live life to the fullest. This is an opportunity to say I have had a great life so far, and anything I do going forward will be a blessing. Hopefully down the road they will find a cure; it may or may not be in my lifetime.”

To support or find out more about ongoing research efforts for ALS, visit ALS Alberta or ALS Canada.

Previous Story On the line: business education in the digital age

Announcements | In Our Communities |