Two Athabasca University grads reflect on how being Canadian shaped their careers in the U.S.

It’s a holiday Monday, but Derek Sidebottom agrees to a quick phone interview, bookended by a 7 a.m. conference call with his team in Kingston, Ontario, as well as getting his three-year-old daughter out the door to daycare. “That’s always the best part of my day, the fun part, too,” says Derek, co-founder of consulting firm Squadley, which helps startups with key human resources decisions and logistics through software he created. Such is the start to a typical workday for the Athabasca University (AU) MBA grad, followed by a subway commute to San Francisco, to meet with clients.

While his “officeless” work regimen is not unique in the Silicon Valley, a tech Mecca which took off in the 1990s thanks to the rise in popularity of the Internet, his approach to business, and even to HR, has been. He likens his business model, all stereotypes aside, to being a “nice” Canadian guy. “I feel like the diversity and the inclusiveness that is the social fabric of Canada suits an HR professional very well. In the Bay area, it’s hypercompetitive. In my case, being more of a listener and bringing a ‘nice’ world view, a tolerant and inclusive mindset suits me well. I have never been perceived as being there to sell you something. I am here to be a partner – and I will attribute that in part to my Canadianness.”

The Milton, Ontario native, like many Canadians, learned the importance of honest, hard work early. He grew up on a farm, before attending classes at the University of Ottawa, then Humber College, with a focus in psychology and then human resources. “I really didn’t know human resources existed until my second year of college, psychometrics class,” confesses Derek, who was instantly smitten with the field.

Derek says he saw HR as a way to make his mark, eventually branching out as an entrepreneur, but not before getting the appropriate experience with big firms, and the MBA for executives program at AU under his belt. Highly recommended by colleagues and alumni of the well-recognized alma mater, boasting the flexibility of not having to be in a classroom and the ability to work at his career concurrently, the choice was a no-brainer for Derek. “I started the program out of Ottawa. I did a lot of coursework out of Chicago’s O’Hare airport and a lot of flying around, which was the only option.”

He adds that, in addition to online learning, the program is well-suited to candidates with business acumen paired with ample real-life experience. The latter part he learned in the trenches at Corel, BioWare, EA Sports, Kabam, and Alcatel/ Newbridge Networks, before hanging out his own shingle. Somewhere along the way, Derek says he got the “startup” bug. Lately, through Squadley, which he co-founded with his partner, wife, and fellow HR aficionado, Jennifer Farris. He enjoys the adrenalin of working with up-and-comers; 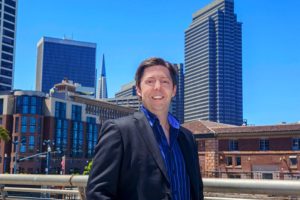 “Startups are kind of like driving mini Tesla sports cars: they go very fast, they perform well, and you’re not sure if they are going to be successful – but it’s a lot more fun.”

His success is marked, now counting firms the likes of Virgin Galactic, HoneyBook, LendingHome, and GoPro among his clients. He also collaborates with fellow Canadian, AU alumnus, and Silicon Valley transplant Blaine Mathieu, as a “guru” in the field of HR for Blaine’s marketing strategy consulting firm. Though ever-appreciative of his Canadian roots (though he admittedly resists not planning outings based on weather), when not working on his business or side projects, Derek enjoys his new life in sunny California. Admittedly prone to product discussions at 11 p.m. with Jennifer (who heads her own HR company), the pair enjoys kid-friendly activities with daughter Evie or exploring wine regions of Napa and Sonoma. He also makes time for shop talk mixed with local nosh with fellow AU alum Blaine, whom he met when the pair worked together at Corel in Ottawa, Ontario.

Blaine Mathieu was champing at the bit to enter business, and the world stage, when most of his peers were looking forward to playing after- school sports. The Chief Marketing Officer and principal consultant at Chief Outsiders (the company recently merged with Clear Strategy Group, which he founded) was admittedly nerdy long before TV shows like The Big Bang Theory made it cool. Not satisfied with playing Pong in his parents’ basement, the Peace River, Alberta native had big dreams that would eventually take him far from home.

“At the age of 14, I started my own company called Turning Point Software, and I wrote software applications to help large enterprises and accounting firms in Canada track clients’ assets,” he notes, with a chuckle. He even had an assistant, his mom, who would field his business calls while he wrote code, initiated direct mailing campaigns and took out ads for his business in the Financial Post.

Like Derek, his business philosophy has been influenced by his native Canada, despite his extensive work in the United States. 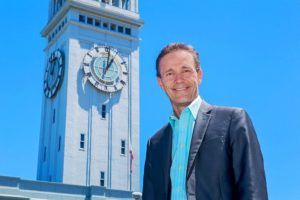 “I have people all the time, ever since I have been in Silicon Vallley, commenting on my Canadianness, that I am a nice guy, that I have a high level of emotional intelligence and that I am very welcoming.”

“I think they even project their attitudes about Canadians onto me.” He doesn’t mind the typecasting, though, because it’s served him well in the cutthroat world of tech companies.

Using his “Canadian approach,” Blaine has grown his business to include gurus from some of the heaviest hitters in the Silicon Valley and across the globe, and is now helping tech companies to “bridge the gap between strategy and execution,” he says. He is currently penning a book, due to be released in September, Creating Profitable, Recurring Revenue Streams with a Business-as-a-Service Model, which will have an associated webinar.

Blaine cut his teeth in the tech industry with stints at Adobe, Corel, and Gartner, where he got his first big- company gig after gaining some street cred with a blog about the ‘new economy’ and the Internet. He touts a business degree from the University of Alberta and an MBA from Athabasca University’s Faculty of Business, and was an early adopter of the Web. “All the MBA papers that I wrote were about the Internet and strategies for the new Internet economy. I wrote my thesis as a business plan for a brand-new Internet company,” he says, noting the business never made it off the drawing board, though he soon did, when the big guns to the south showed interest. “I had Amazon and I had Gartner (calling), but I really wanted to get to Silicon Valley – so I chose Gartner.”

He started working with Gartner from his home in St. Albert, Alberta, but left for California soon after netting his MBA from AU in 1999. His career has been spent mostly in the States, except for a stint with Corel back in Ottawa in the early to mid-2000s – where he fortuitously met fellow Canuck, Derek Sidebottom.

Over the years the two have reflected on much common ground, from being Canadian, to the Athabasca University MBA program, to their experiences in Silicon Valley. He echoes Derek’s sentiments about the well-designed curriculum and format, which has served him well.“It[AU] was using the latest in online collaboration technologies, which appealed to me as a tech guy, the notion of an online MBA,” he explains.

Blaine is father to an adult son, who is now following in his dad’s footsteps by completing a business degree and now holding a position at tech startup Houzz, and husband of 28 years to wife Wendy, who shares his love of Canada as well as his love of lifelong learning.

Starting as a teacher and school administrator back in Canada, Wendy is now the Director of Product Management for Pearson Learning. Their love of technology often spills into home life, he jokes. “We spend our evenings talking about technology together, because that’s what we both do all day.”

Next Story Where in the world?