Nurses on top of the world

When Karen Willan walked across the convocation stage in the namesake town’s Multiplex this morning, the degree presenter read aloud the Bachelor of Nursing graduate’s grateful words:

“Karen will never forget how she felt the day she submitted her final assignment — the realization that she had completed this degree was the best feeling in the world. She thanks her family and friends for their endless support.”

When it came to her own turn to glide across the same stage, same ceremony, the words of Karen’s slightly older sister, Cynthia, rang similar — while praising parents Ralph and Margie, close friends, and her older sister, Jennifer — each of them “being my support system throughout this this long journey.”

“I couldn’t have ever completed this program without all of their love and never ending encouragement,” the reader continued, closing with Cynthia’s sweet nod to sister nurse Karen — “for taking on this adventure with me, from start-to-finish, and graduating alongside me, today.”

They’re not twins, but physical traits — and dates of birth — can be deceiving. Cynthia and Karen Willan, 32 and 35, respectively, enrolled in AU’s nursing program in 2013 (Cynthia had taken an unrelated, standalone elective the year prior), from their hometown of Leamington, Ontario, after they’d both completed the first half of the traditional ‘RPN-to-RN’ bridging program at Toronto’s Centennial College.

The women were simultaneously working full-time at their local hospital — where each still works today — in different departments; Cynthia in the operating room, while Karen works on a medical-surgical floor.

They may have wound up on the same career trajectory, but it didn’t start out that way. As teenagers, the sisters, along with their older sister, Jennifer — also a Registered Nurse (RN) — worked part-time at a local retirement home. That experience, says Karen, planted the seed for her nursing future.

“That’s kind of what got me wanting to go into the profession,” she says.

Cynthia, on the other hand, had different plans.

“I thought I wanted to do social work and then become a teacher,” she says, noting she began the former pursuit at the age of 19, right out of high school in Leamington — located in the southernmost point in Ontario, encompassing Point Pelee National Park, in winery-laden Essex County, three-quarters-of-an-hour’s drive from the Detroit border, four hours from Toronto. And fun fact, says Cynthia (and corroborated by an article in the Windsor Star): Leamington, as former home to the H.J. Heinz Company, is also famous for being “Canada’s tomato capital.”

Different career goals as youngsters, notwithstanding, there’s no question the sisters were committed to carving out community-based careers designed to help improve the lives of the public they would serve. Yet, after a couple of years in the University of Windsor’s social work program, Cynthia did a double take; perhaps nursing was, in fact, her calling, after all.

She had noticed the job prospects in social work weren’t that promising. So, she decided to enroll in the two-year Registered Practical Nurse (RPN) program at Windsor’s St. Clair College. From there, she entered the Ontario workforce, full-time, as an RPN in the local hospital, where she remained for nine years, before continuing her education path to becoming an RN.

It didn’t take sister Karen long to catch up. Straight out of high school — keeping on-track with her teenage dream of becoming a nurse — she, too, entered St. Clair College’s RPN program, also working full-time at the local hospital for about eight years, until the siblings made the collective decision to finish their degrees, together, through Athabasca University.

For the Willan sisters, AU just made sense.

“We wanted to become Registered Nurses (RNs) … [but] we didn’t want to give up full-time positions to go to school,” says Cynthia.

Further, she says that making good on their St. Clair College course commitments weren’t always smooth-going. “We found that it was too hard to get to class every week with work schedules, and trying to get to exams and everything else,” Cynthia explains.

Not to mention, the siblings had already come this far – “no point in quitting now.”

“We needed to finish … somehow,” she explains.

“So when we had the opportunity to switch to Athabasca, we did it. The flexibility [AU] offered, by being able to complete the program through distance education, allowed us to complete our degrees while working full-time.”

“For the Willan sisters, AU just made sense. “We wanted to become Registered Nurses (RNs) … [but] we didn’t want to give up full-time positions to go to school.”

The Sisters Willan made the switch — without having to upend their reliable salaries and comfortable Leamington lifestyles.

“Cynthia and I both maintained full-time jobs throughout the whole AU program,” Karen attests.

Parchments and Pride on the Prairies

The Willan family, minus sister Jennifer, decided to turn Karen and Cynthia’s degree celebrations into a wee holiday. Mid-week, leading up to Friday’s convocation in Athabasca, Cynthia, Karen, and parents Ralph and Margie, flew the four hours from Toronto’s Pearson Airport to Calgary, visiting some friends in the city Wednesday night, before heading by car to Banff and Lake Louise the next day — places, Mom Margie says, she hadn’t seen since “way before I was even married.”

“This is why we came out a couple days earlier: to see some friends, re-trace some territory — and, yes — I’m interested in seeing Athabasca and the campus. And maybe getting to meet some of my daughters’ friends from their courses, as well,” she adds, her long-distance voice, via Pearson, clearly signalling a beaming smile over her daughters’ combined milestones. 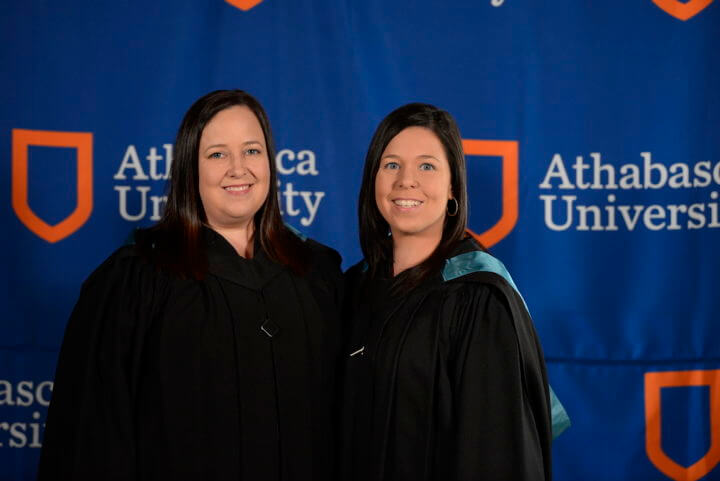 “We needed to finish … somehow. So when we had the opportunity to switch to Athabasca, we did it. The flexibility [AU] offered, by being able to complete the program through distance education, allowed us to complete our degrees while working full-time.”

“As a mom, I’m just proud to see what they’ve accomplished. Working full-time and doing the program over the last five years — yeah, we’re very proud of them.”

Margie may officially be the mother to three young RNs, but she doesn’t take credit for instilling in her daughters their shared capacity for caring.

“I think for Karen it was the fact she worked at a retirement nursing home — starting in the dining room. She stayed there right until she got hired at the hospital the first time,” she says.

“And ‘Cindy’ (short for Cynthia) — well, she ended up at the same retirement home. And, so did our oldest daughter! So, I think that’s basically [what did it] — just starting at a young age, you know, and being with senior citizens.”

She concedes however, when her girls were growing up, the writing was pretty much on the wall.

Like many little girls who are wont to ‘play house,’ the Willan girls played ‘nurse‘ — “here and there,” Margie reflects — and with real-life family patients as props.

“They were always really good with their grandparents; they took care of them.”

The last time Karen and Cynthia were in Alberta was during their month-long requisite clinical placement, last May, in Calgary. The pair worked in separate groups of five and eight, in different units at Rocky View General Hospital, led by different teachers. Today, Cynthia fondly recalls “walking out of my last ‘NURS 441’ shift, and realizing that I made it; I finally completed my nursing degree!”

“It was the greatest feeling to know that I accomplished everything I had worked so hard for over the past six years.”

Looking ahead, she is eager to “continue growing in my role as a registered nurse and experiencing work in different areas within the nursing profession.”

And, as one might guess, sister Karen’s goals aren’t far behind:

“The best thing about having completed my degree is that now it will open the doors to new opportunities and career options,” she says, acknowledging AU’s flexibility and support.

“Going back to school to obtain my degree, while maintaining a full-time job working as a Registered Practical Nurse in Ontario, would not be possible without the option of online learning. I thank Athabasca Univeristy for providing me the opportunity to complete my degree and work at the same time.”

Congratulations, Cynthia and Karen! Enjoy your new jobs, backed by your fresh RN designations, as you continue transforming yourselves and the lives of your patients with whom you connect, each day.

Teaching “Tay John” on the Yellowhead Highway: A memory by Dr. Joseph Pivato

The importance of self-care

Learners | Words to the Wise |