One of the books I tutor as part of ENGL 305 is L. M. Montgomery’s Anne of Green Gables. The book is a popular text with students, and I always enjoy reading student essays that comment on Anne and her antics. Anne of Green Gables was first published in 1908, and Montgomery went on to write many more books in the Anne series.

If you know Montgomery as an author, you know that she wrote only one book about the war: Rilla of Ingleside, published in 1921. This book focuses on Anne’s daughter, Rilla, who, like so many young women in Canada at the time, wanted to make her contribution to the war effort. Montgomery may not come first to mind as an author who wrote about Canada’s involvement in the Great War, but she writes vividly and poignantly about those women who supported the war effort from home, and the anxiety over waiting for news from the front, both in Rilla of Ingleside and her journals from the period. To commemorate this Remembrance Day, consider reading Rilla of Ingleside, or any of the entries covering the war years in The Selected Journals of L. M. Montgomery, Vol. 2, 1910-1921, edited by Mary Rubio and Elizabeth Waterston. 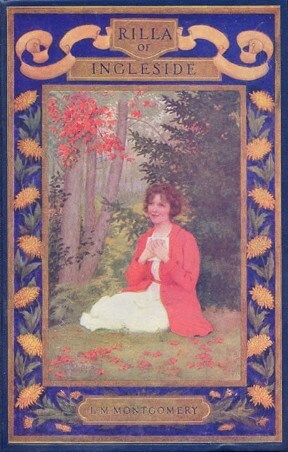 “Montgomery may not come first to mind as an author who wrote about Canada’s involvement in the Great War, but she writes vividly and poignantly about those women who supported the war effort from home, and the anxiety over waiting for news from the front, both in Rilla of Ingleside and her journals from the period.”

If you read Montgomery’s journals following the outbreak of war in August of 1914, you will see Maud, the mother, minister’s wife, and author, who worries incessantly about news from the front. On August 19, 1916, Montgomery writes: “I do my writing in the parlour now, as said parlour possesses the only door in the house which young Chester cannot open … Wednesday and Thursday I was miserable…. Naturally, visitors took that day for appearing. The Russians have captured Tarnapol heights and the British and French have renewed their offensive.” Another entry, dated May 29, 1918, speaks to the long-lasting effects of the conflict on returning soldiers, who came home to Canada but were never able to leave the war behind: “We went to Uxbridg today to see a military funeral. Kernal Sam Sharp … was buried. He came home from the front quite recently, insane from shellshock and jumped from a window in the Royal Victoria at Montreal.”

Perhaps Montgomery’s most poignant comments on the war come from one of her characters, Walter Blythe, youngest son to Anne and Gilbert. Rilla of Ingleside is largely a coming of age story for Rilla. She does her part for the war effort, while her worry over the conflict centres on her brothers who have left home to join the front. On the eve of battle, Walter writes to Rilla, knowing he will be dead by the time Rilla receives his letter:

“I’ll never write the poems I once dreamed of writing—but I’ve helped to make Canada safe for the poets of the future—for the workers of the future—ay, and the dreamers, too—for if no man dreams, there will be nothing for the workers to fulfil—the future, not of Canada only but of the world… . Yes, I’m glad I came, Rilla. It isn’t only the fate of the little sea-born island I love that is in the balance—nor of Canada nor of England. It’s the fate of mankind. That is what we’re fighting for. And we shall win—never for a moment doubt that, Rilla.”

Bill Thompson is totally blind, and he tutors ENGL 305: Literature for Children at Athabasca University. His stories have appeared in Hippocampus Magazine, The Danforth Review, and Literary Orphans. He has two collections of stories—The Paper Man and Other Stories, and Fractured and Other Fairy Tales—both available on Amazon, and he maintains a website and blog at OfOtherWorlds.ca. Currently, he is working on a young adult novel set in a post-pandemic future.

Next Story In conversation with Richard Van Camp

Faculty of Humanities and Social Sciences | In Our Communities | Learners |

Getting more mindful about mental health

Alumni | Faculty of Health Disciplines | Words to the Wise |