There’s something magical, and definitely otherworldly, about gazing at a night sky aglow with the northern lights.

That swirling fluorescence and dance of colour is actually the impact of space gasses hitting the atmosphere after travelling 148 million kilometres from the sun. Not only is aurora borealis proof of the vastness of the universe, it’s pretty darn cool to watch.

“It’s a free light show in the sky,” says Dr. Martin Connors, a professor of space science and physics with Athabasca University’s Faculty of Science and Technology. “I think a lot of people are fascinated by the dramatic colours, and then if you give it a little bit of thought, you start thinking, ‘The sky is on fire. Why is that?’ It stimulates curiosity.”

As someone who studies space weather, Connors is no stranger to aurora gazing. He operates both of AU’s observatories on campus and in Athabasca County, one of which is equipped with a live sky cam—great for viewing aurora conditions in real-time. He helps explain how auroras form, why this is a great time to catch a light show, and what you need to do to ensure a good view.

“A lot of people are fascinated by the dramatic colours, and then if you give it a little bit of thought, you start thinking, ‘The sky is on fire. Why is that?’ It stimulates curiosity.” 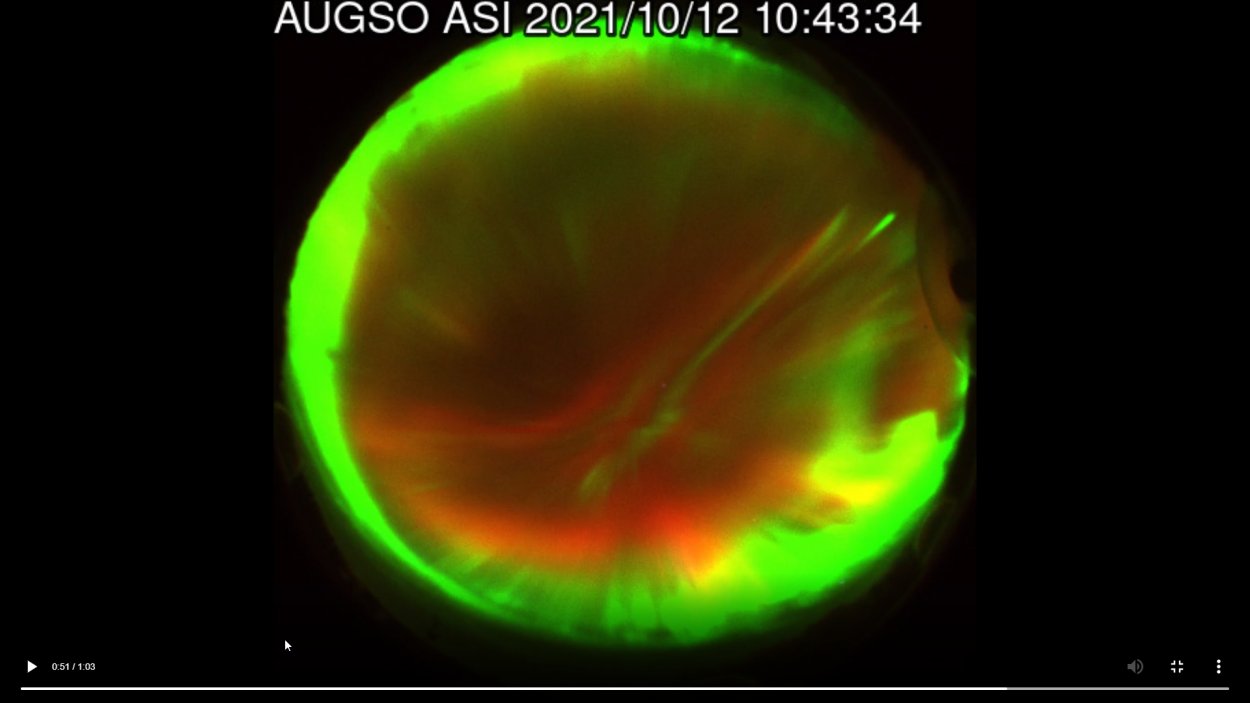 Northern lights captured in the early morning by 360-degree cameras at an AU observatory. These images were taken minutes apart and show colour changes that occur due to changes in pressure and gas. 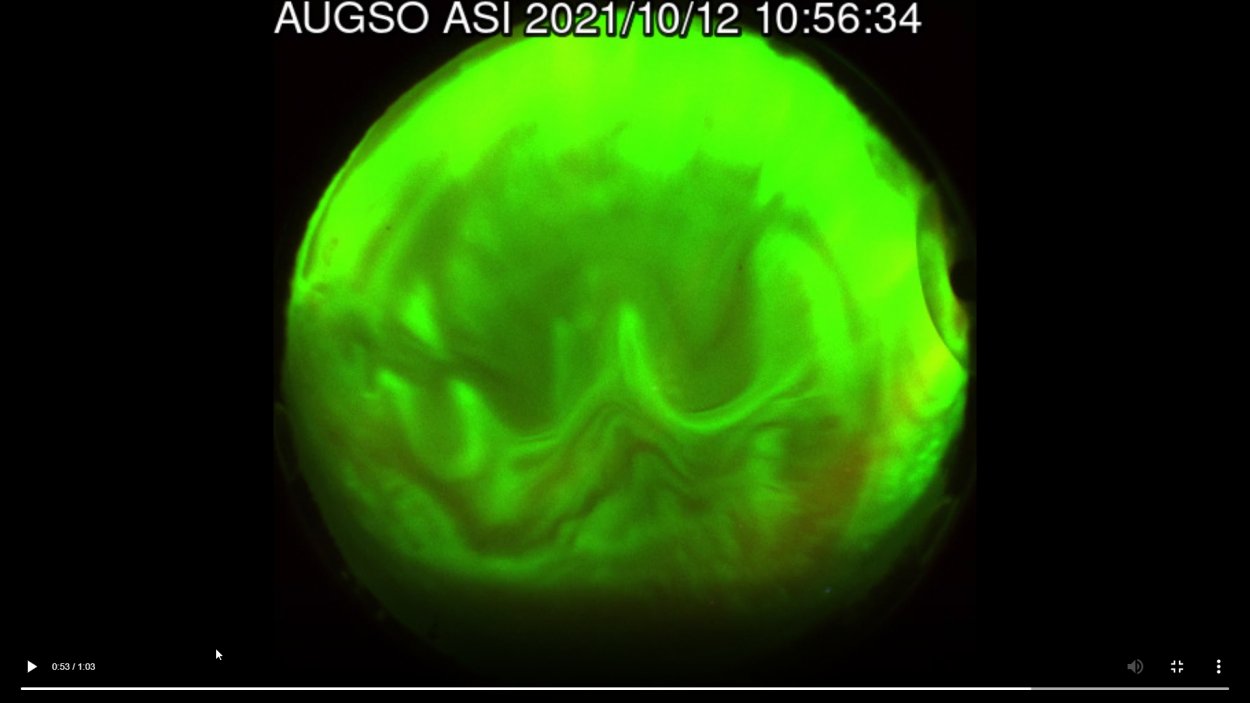 Northern lights captured in the early morning by 360-degree cameras at an AU observatory. These images were taken minutes apart and show colour changes that occur due to changes in pressure and gas.

The Hub: OK, what exactly is aurora borealis?

We are seeing particles from the sun hitting the atmosphere as part of an electric circuit. It’s called fluorescence, and it’s the same thing that happens in a fluorescent light bulb. Particles pass through the light bulb and hit mercury vapor atoms inside, which is very efficient at giving off light. The electrons particles hit that gas and make it glow. Exactly the same thing is happening in Earth’s upper atmosphere during an aurora. Luckily, it’s not mercury. It’s oxygen, and to some degree nitrogen, that get hit by particles, and then glow as a result.

There have been a lot of aurora sightings in Canada and elsewhere lately. Why is that?

The sun kind of turns on and off with a period of 11 years, on average. That’s called the solar cycle and it is ramping up, which means there are more opportunities to see aurora. In previous years, when the cycle was at a minimum, there were fewer auroras and fewer sunspots. The peak of the solar cycle could last as long as three or four years, so it’s just getting started for prime aurora conditions.

The colours of northern lights vary from event to event, or even by the second or minute. Why is that?

The colours are mostly due to oxygen. An aurora appears red if particle collisions happen higher in the atmosphere, about 300 km. It appears green lower in the atmosphere, about 100 km. Auroras change colour due to changes in pressure, much like in old-style neon lights where they change the colours by changing the gas, the pressure, or both. As you can see in the observatory images, the colours in that aurora changed quite quickly—in just a few minutes.

Related: Space weather is difficult to predict—with only an hour to prevent disasters on Earth

There are a lot of apps that send out alerts about when to expect northern lights. How accurate are they?

A favourite quote of mine by Mark Twain is: “It’s hard to make predictions, especially about the future.” So basically, the only so-called predictions that are reliable are for things that already happened. I think what happened in early November [when predictions of an auroral storm did not come true] was a prime example. There’s absolutely no question that a huge cloud of gas was shot from the sun towards the Earth, but it didn’t actually hit us so there was little aurora to see. The most reliable predictions happen about an hour ahead of time, when particles start hitting satellites.

What can I do to confirm if there is an aurora (short of seeing photos pop into my social media feeds)?

AU has a major observatory about a 40-kilometre drive outside of Athabasca, at the edge of dark sky territory. You might want to check our camera first to make sure there really is an aurora before you go see for yourself. If something is going on and quite bright in Athabasca, you’ll see something from Edmonton.

When is the best time to view northern lights?

Normal auroras are most prevalent around midnight, so you might see them starting around 11:30 p.m. It’s quite rare to see one early in the evening. If you do see one early, you’re well advised to keep looking because it can probably only get stronger toward midnight.

Where is the best place to view the northern lights?

You want to get out of town into a dark sky. For a larger city like Edmonton, that’s about an hour’s drive or 50 to 60 kilometres. You need to get away from light pollution.

If you’re lucky enough to catch an aurora, what’s the secret to photographing it?

They’re actually not that hard to photograph with modern cameras, including iPhones or with other smartphones, provided you can manually control shutter speeds and the camera’s aperture. The only trick is, you really want to have a tripod because the shutter needs to be open for a few seconds. (Check out these tips from a pro photographer).

Do you jump into the car and head for the country to chase auroras?

Since I have an observatory where I can stay overnight, I don’t tend to chase them myself. We’re the only university in Canada that actually has its main campus in a site that’s suitable for prime observation.

Ready to chase auroras? Get inspired with these amazing images

We’ve gathered some of the most jaw-dropping images of the northern lights captured in Canada in the past few weeks. Enjoy and happy chasing!

Faculty of Health Disciplines | In Our Communities |

Announcements | Beyond 50 | Learners | Words to the Wise |