Flexibility fit for a pro (Part 2)

Read Part 1 of Flexibility Fit for a Pro

Craig Schira started studying with AU back in 2008, when he enrolled in entrepreneurial studies. Then a WHL player for the Vancouver Giants, Craig was one of the first WHL players to “officially” study with us. He has continued his studies over the years and, is now, just one course shy of receiving his university certificate in Management Foundations.

Considering the places he has played, Craig’s studies have adapted to his  environment. Hockey rink, hotel room, or on the bus between games, Craig has thoroughly enjoyed the flexibility that online education at AU has afforded him. His hockey career has included seasons in the WHL, the American Hockey League (AHL), the Finnish Elite League, and the Championship Hockey League in Sweden (where he currently plays for Luleå SF).

And, as he gets closer to completing that certificate program, he’s learning even more about balance—he and his wife are expecting their second child in May.

Fittingly, in between games during Luleå SF’s run in the playoffs, Craig was able to answer a few questions for us via email.

How did you get involved with Athabasca University? Where were you living when you enrolled? Did you start while you were a Regina Pat?

I got involved with Athabasca when I was playing my final year of junior hockey for the Vancouver Giants. My roommate and I were told about AU and we thought it would be a good idea to get involved. Neither of us really knew if it would be something that we would continue with, but we both signed up for a small business management course and worked through it together.

Where are some of the places you have studied?

I have worked on my courses in many different places, over the years. Where I do my work depends on the travel schedule of the team that I am playing on. For example, I played in Finland for two years and the travel schedule was very easy compared to some other places. Most games usually required just a short bus ride to the games so there wasn’t much time spent in airports or hotel rooms. However, currently I am playing in Northern Sweden. We spend a lot of time on the road, so you will often see me reading a textbook, or notes on my phone, in the airport or in hotels.

In terms of writing exams, it takes a lot of planning to find places to write exams at approved AU locations. It is not always easy to set up but, fortunately, it has worked out so far. I have written exams in Oslo, Norway; Helsinki; Finland; Binghamton; New York; Sweden, and, of course, in Canada.

What were the primary differences in your relationship with education at the start of your certificate coursework, versus now? How has your mentality changed?

I think when I first began my studies, it was more of just “something to do,” and I wasn’t really sure what I wanted from it. I knew it was important, but I wasn’t sure it was something I wanted to continue with, or see through to the end. That aspect has changed. I think now that I have a family, and understand that hockey doesn’t last forever, it puts things into perspective. I see how important it is to have a back-up plan of some kind. I am not at the end of my career, but I understand that hockey can end at any point.

What was the choice like to leave the AHL and head to Europe? Did you worry about completing your education at all, at this point?

Leaving for Europe was a big change for my wife and me. It can obviously be very scary to pick up and leave something so familiar, to go somewhere that you know very little about. But after discussions with my wife and my agent, we decided that a move to Europe was the best move for us.

The style of game is better suited to the way I play; it provides a great family lifestyle and allows us to see the world. At the time that I left for Europe, I really wasn’t sure if I even wanted to continue my education—how hard I wanted to push it—or how difficult it would be to continue overseas. But, overall, it has been a smooth transition and with a little extra planning and organization, I have been able to continue with it.

What are the realities like for professional athletes pursuing higher education? In your history, for example, what has the mentality of your friends/teammates been about education? A lot of conversation happens around whether  athletes have a back-up plan after their athletic careers end—did that entice you to start on your certificate?

Like anyone pursing a higher education while juggling the demands of a career, it can be very time-consuming and challenging. For me, as a professional athlete, it is important that while I continue my studies I don’t let it interfere with my career. My number-one priority right now is providing for my family—and it is hockey that will currently do that.

I can’t speak for everyone, but I think it is a little bit mixed with each team I am on. I am sure there are lots of guys that have no interest in an education but, then again, there are some guys that are very aware of its importance and are pursuing it. And then there are some guys that don’t know it is an option. I think it is important to have a back-up plan of some sort, as hockey can end at any point. Personally, I don’t have a specific plan for when I am done playing, but I feel like a higher education will open up opportunities for me that would be a worthwhile investment.

Do some athletes often simply not pursue education because they find access difficult? How has AU allowed you to pursue what others are not able to? What has been the most valuable part of your online education?

I think an awareness that there are programs available that cater to those who are in an unpredictable profession, such as athletes, is important. If guys have questions about my studies, I try and encourage it, and let them know that education is accessible and available to them.

I have learned so much over the years about my education. There are some days where I feel like maybe I can’t do it, or I feel like quitting, but it has taught me to persevere. Also, I wasn’t the greatest high school student, but I have been able to be very successful at the university level. I think this proved to me that I can do anything I set my mind to. Believing in yourself and your abilities is truly the most important aspect of succeeding in what you do.

Hockey has been an amazing journey so far, and I am so thankful I have been able to pursue this as a career. It has given my family and me so much. I have met many great people—from coaches, teammates, and fans—and all the valuable lessons they have taught me about life, and about myself. Hockey has given me the opportunity to work together with others to reach a common goal, and to also fight through adversity. Along with discipline and sacrifice, these things have benefitted me in my education as well; I have faced a lot of the same internal challenges in hockey as I have in my education. 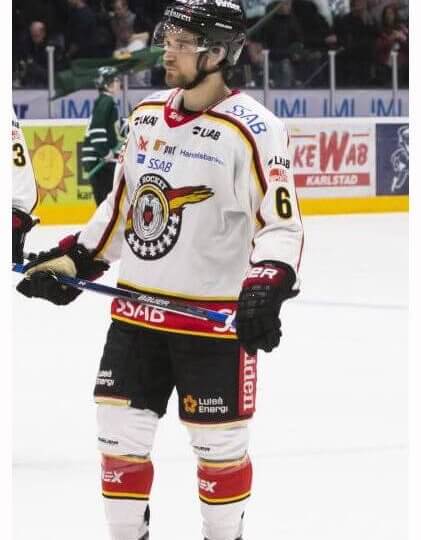 What has been the most difficult part of your educational journey?

The most difficult part of my educational journey is time management. I have a two-year-old son, and another one on the way in May, and, as any parent will tell you, it keeps you busy.

Trying to balance hockey, family life, and education is a challenge—but it is something that I am learning and improving at, as I continue on this journey.

Any advice for AU students?

Find the discipline to stay consistent; take advantage of the student support systems offered in the courses; stay organized and manage your time; and, lastly: each course is a process, so ensure that you understand the concepts before moving on to a new lesson—because you will usually end up missing something important that you will need to then go back and learn.

Next Story Propelled to lifelong learning