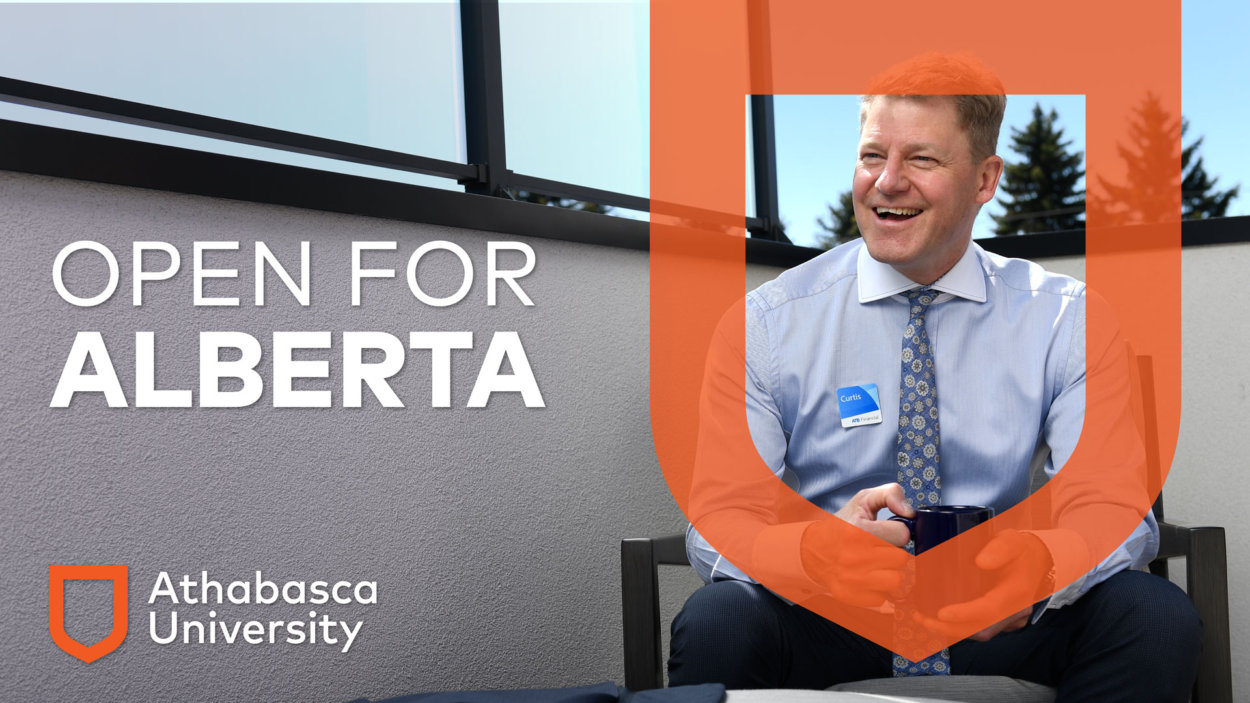 Curtis Stange (Master of Business Administration ’00)  was a middle manager at an Edmonton bank, a busy parent of 2 boys, and a coach of their hockey and soccer teams when his boss encouraged him to pursue a business degree. The MBA program at Athabasca University (AU) added 25 hours a week of study to his workload.

“It sounds cliché but I couldn’t have done it without the support of my family,” says Stange, now president and CEO of ATB Financial. “And even though it was a ton of work, we knew it was the right investment—and it certainly paid off.”

ATB, a Crown corporation wholly owned by the province of Alberta, serves some 800,000 clients and employs more than 5,000 Albertans. It’s a big job, and for Stange, it’s the high point so far in a career trajectory that spans 3 decades and has seen him move from a distant branch in a small Prairie town to the upper echelons of the Canadian financial services industry.

“Even though [AU] was a ton of work, we knew it was the right investment—and it certainly paid off.”

‘Springboard for my career’

Getting there would not have been possible without AU’s highly respected graduate business program. “It really was a springboard for my career,” he says. “I honestly don’t think I would be where I am today without my MBA.”

Stange did not exactly dream of a career in banking when he was attending high school in Regina, where his family had moved from his native Winnipeg when he was 13. He was, he says, the quintessential “city kid who wanted to get into farming.”

He went on to study agriculture at the University of Saskatchewan, but just before graduation, he attended a career day and met a rep from CIBC.

“He said if I couldn’t get into farming, then why not join CIBC and help farmers be successful?” Stange recalls. “That sort of resonated with me.”

From small-town Saskatchewan to middle-management

So, he joined the bank in 1986 and was promptly assigned to a small Saskatchewan town—“sort of a training program,” he says.

Over the next decade, he worked across the country for CIBC, steadily rising to middle management and complementing his financial education by taking the Canadian Securities Course.

In 1997, while working in Edmonton, his managers suggested he pursue an MBA to help him take the next step up. Initially, they encouraged him to take a full-time program at university.

“I didn’t know if I would even be in Edmonton in 2 or 3 years, so I thought, why not get into an MBA that offers flexibility to learn from anywhere?”

MBA the next step

“But I had a very busy family life,” Stange says, “so I needed the ability to learn when I could. Also, I didn’t know if I would even be in Edmonton in 2 or 3 years, so I thought, why not get into an MBA that offers flexibility to learn from anywhere? And wow, I needed it.”

Sure enough, Stange was transferred to Toronto when he was about three-quarters of the way through his studies. AU’s flexible learning model allowed him to put the MBA on hold for a few months while he and his family got settled and he got used to CIBC’s bustling head office downtown.

Learning to ask the right questions

“It was pretty competitive, and it was the kind of place that if you didn’t have your MBA, you wouldn’t even get looked at,” he says. “But the coursework from Athabasca University helped me to start asking the right kind of strategic questions—questions that would have been beyond my experience with the bank up to then. And then, you know, all of a sudden people looked twice.”

After graduating in 2000, Stange started climbing up the executive ladder. “It really helped me crack that ceiling,” he says.

In 2005, he was promoted to vice-president, retail markets, for CIBC, where he oversaw the bank’s client-facing business across the country. Four years later, he got a call from ATB asking if he would be interested in a move, and after some reflection, he jumped at the opportunity.

Stange started as executive vice-president of business and agriculture, then went on to chief strategy/operations officer and chief customer officer. He became ATB Financial’s president and CEO in July 2018.

“I always say to my wife, a bit jokingly, that I made two great decisions in my life,” Stange says. “The first was to marry her, and the second was to join ATB.”

“It’s a world-class education, it’s online, and they have been doing it for a long time. All of that in one package made it right for me.”

Today, Stange remains “a big fan” of Athabasca University and its open, flexible, online model. Many ATB employees are AU graduates, and he regularly encourages team members to consider upgrading their education through the university’s MBA and other programs.

An AU education “really meets the needs of someone who’s looking to invest in a catalyst for their career,” Stange says, with the added benefit that students can keep working.

“You’re in the workforce while you’re studying, so you can apply what you’re learning right away,” he explains. “It’s a world-class education, it’s online, and they have been doing it for a long time. All of that in one package made it right for me.”

Filed Under:
Published:
Tagged In:
finance, mba, open for alberta,

Next Story 5 tips to control your holiday spending