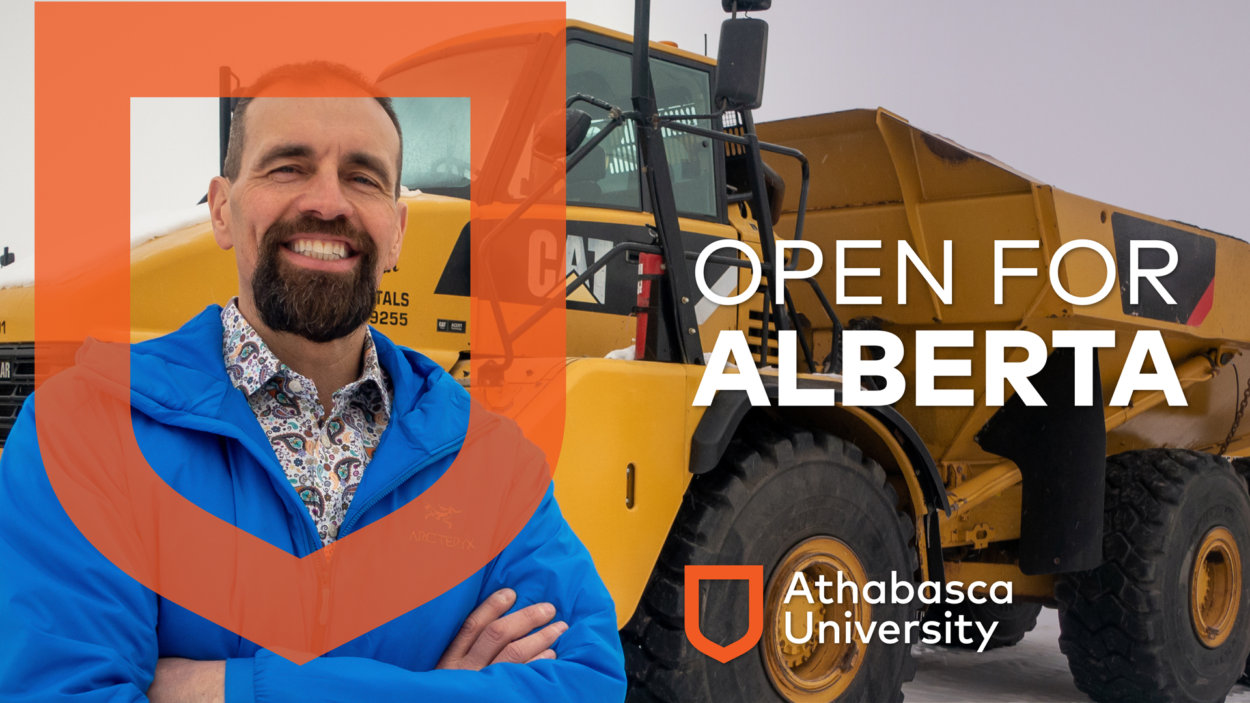 When Bob Willows (Master of Business Administration ’19) first thought about getting a master’s degree in business from Athabasca University, the president of Willows Construction admits he could “barely turn on a computer.”

Growing up on his parents’ farm near Buck Lake just south of Drayton Valley, Alta., he learned the value of hard work from a young age. In fact, in the early days of Willows Construction, a civil earthworks and environmental services company started by his father Ron in 1981, Willows and his 2 younger brothers were the only work crew. His future in the industry and running big equipment seemed all but certain.

“I was no honours student,” he recalls. “I was always going to make money with my hands.”

Willows did exactly that—at least at first. After graduating with a business diploma in 1989, he worked under his father for several years before starting his own venture, Xtreme Xcavation, which he would build into a success and later sell for a tidy sum. After a few years at a public company, he came full circle and returned to Willows Construction, taking over from his father.

Despite all the hard work and success, Willows felt like he owed it to himself, to his business, and to the employees and families who depended on him, to expand his skill set.

That meant doing something potentially uncomfortable and going back to school. He was counting on AU’s online MBA program to help him excel as a business leader, but what ended up surprising him was how the experience changed Willows Construction’s approach to doing business, especially with Indigenous communities.

The joke in the Willows family is that no one can hold down a “real job,” apart from mother Irene, a registered nurse. Brothers, uncles, aunts, cousins, nieces, and nephews all have at one point or another started their own businesses, he says. The family enterprises include everything from farming to real estate to plumbing to autobody repair to hat-making.

“We are a family of entrepreneurial types.”

“We are a family of entrepreneurial types.”

So after working for his father into his mid-30s, it wasn’t a surprise that the younger Willows wanted to strike out on his own. In fact, in the years leading up to founding Xtreme Xcavation in 2004, Willows says he often hounded his dad to sell him a piece or 2 of equipment to help him get started. Ron eventually relented.

For the next 3 years, he poured everything he had into building Xtreme Xcavation into a success. He worked a punishing schedule—92 days in a row at one point—but the hard work was paying off. The company was growing and at one point employed about 70 staff.

“I’d come home once in a while but I wanted to make the business successful,” he recalls.

The long hours would take their toll, including on Willows’ marriage. They eventually sold the company for $12 million to Winalta Inc., a private homebuilder. Willows stayed on as a director, and embraced his new role as an opportunity to expand his skills and network.

“ I was coming from private business. It was not your money you were dealing with so you had greater responsibility to the shareholders.”

“I was a young guy,” says Willows, then 38. “They were a public company; I was coming from private business. It was not your money you were dealing with so you had greater responsibility to the shareholders. Ethically, it challenged you in your decision-making.”

Willows met mentors like the late Mel Benson, who at the time was a director for Suncor and served on Winalta’s board. Benson, a member of Beaver Lake Cree Nation, was instrumental in sparking an interest in working with Indigenous communities.

“I had a lot of respect for him. He was a very well-spoken guy.”

Willows credits Marvin Romanow, who at the time was president and CEO of oil company Nexen Inc., for getting him to think about something he never ever thought he’d consider—going back to school.

By 2010, Willows had finished his contract with Winalta. His parents, both in their 60s, were looking to retire so Willows bought them out and took over Willows Construction as president and CEO.

It didn’t take long for the company to prosper under his leadership. Willows Construction went from doing a few million a year in contracts to surpassing their goal of $25 million. “We achieved that quite quickly,” he says.

As the company grew, the financial reporting needed for bonding and loans became more complicated. Willows wanted more comfort on the accounting side of the business. When he sought Romanow for counsel, the advice was succinct: “Get an education.”

As president of a growing company, taking time off work wasn’t an option. The flexibility of AU’s online MBA was perfect for his busy schedule, and after chatting with several AU staff and hearing rave reviews about the program, in 2014 he decided to make the jump.

Signing up for post-secondary for the first time in a quarter-century—and in an online program—definitely gave Willows pause. He failed typing class in high school, he says, and often relied on his staff to help draft emails.

“I felt way behind the curve in terms of an online learning platform.”

“I was surprised at the depth of the people taking the course. This person is doing well already. Why am I here? These are some ultra-successful people.”

With help from tutors, professors, and staff in IT, Willows found his stride. He also found an impressive new network of peers whose experiences he could absorb. He met people from a variety of backgrounds: teachers, accountants, and nurses, but also entrepreneurs with considerable business acumen.

“I was surprised at the depth of the people taking the course,” he says. “This person is doing well already. Why am I here? These are some ultra-successful people.”

Willows Construction had long prided itself for working with Indigenous communities on projects and providing good-paying jobs. But his MBA experience changed Willows’ perspective.

For one of his applied projects, he decided to write a paper about meaningful engagement of Indigenous communities and Indigenous people. Working under the supervision of Dr. Angela Workman-Stark, an international expert in creating inclusive workplaces, Willows’ first draft started at 80,000 words and continually evolved with each submission and feedback. “She is tough—in a good way,” he says.

Willows’ research included first-person interviews with Indigenous groups. The work he put in not only helped improve his paper, it changed Willows Construction’s approach to working with Indigenous communities.

“We had lots of partners, but didn’t have a huge amount of success,” he says.

The company has since entered into partnerships with Enoch Cree Nation, west of Edmonton, and George Gordon First Nation in Saskatchewan, among others. Willows says that just over a quarter of their employees are Indigenous and the company’s contracts have injected $2 million into Indigenous communities over the last 5 years.

Taking a turn with non-profits

Willows’ MBA has created opportunities in other ways. Within weeks of graduating in 2019, he was approached about serving on the board of Alberta Ballet.

“I’m considered an oilfield guy. I’d never been to the ballet,” he says.

Intrigued by the idea of learning about the not-for-profit sector, and ballet in particular, Willows decided to take in a few performances. He hasn’t looked back and now attends every production. More importantly, he’s learning from another diverse group of talented people through the board.

“I love the work, love the board. It’s a completely different board [than the private sector]. Fantastic group of people.”

“I love the work, love the board. It’s a completely different board [than the private sector]. Fantastic group of people.”

It’s that commitment to lifelong learning that saw Willows, now 51, recently enrol in the Rotman-ICD directors education program at the University of Toronto. He’s also contemplating a return to AU for his doctoral studies, hopefully related to the Indigenous space.

“It’s something I would like to do before I’m too old. I feel there’s so much to learn.”

At least for now, Willows says he’s content to continue building his business and creating jobs and economic investment across Alberta and Western Canada. The lessons he learned about hard work all those years ago on the farm, and through AU, continue to reap rewards. And he hopes his experience inspires others.

“Hopefully this story will resonate with someone and they’ll go out and succeed too.”

Filed Under:
Published:
Tagged In:
alberta, mba, open for alberta,

Next Story Nursing grad advocates for equity in health care

Alumni | Faculty of Humanities and Social Sciences | In Our Communities |