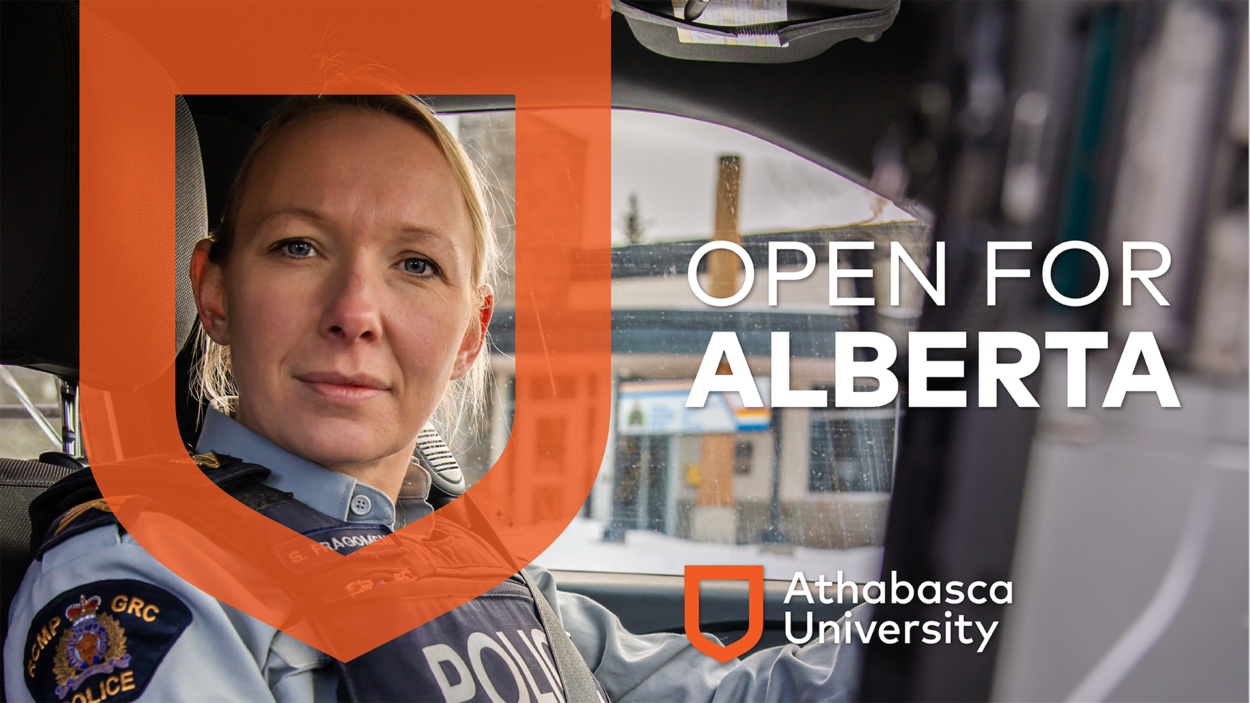 Shiloh Fragomeni of Hinton, Alta. has studied with AU through postings across rural Alberta

After 16 years with the RCMP, Staff Sgt. Shiloh Fragomeni is used to change. Since she joined, she’s been posted all over Alberta, in Sherwood Park, Red Earth Creek, Grande Prairie, and now Hinton, where she’s the new detachment commander.

One thing that hasn’t changed is her ongoing studies at Athabasca University (AU). Since 2008, Fragomeni has taken advantage of the flexibility offered by Canada’s only open and fully online university in pursuit of a Bachelor of Professional Arts, Criminal Justice Major. She knows it’s taking a long time—that’s just the way she wants it.

“This will probably turn out to be the longest degree ever,” she jokes, “but that’s OK because I’m a little bit addicted to it.”

“This will probably turn out to be the longest degree ever, but that’s OK because I’m a little bit addicted to it.”

Rising in the RCMP ranks

The Hinton posting is her first management role. She oversees a staff of 19 and serves as the face of policing in the town of 10,000. Her schedule is anything but regular, and at home, she has a toddler and a 10-year-old to care for.

“One thing I like about AU is I can follow my own timeline,” says Fragomeni, 41. “I can do a course in 6 months, but if I have time on my hands I can do it in 4—whatever works with my schedule. If I had to go to class and be somewhere every Tuesday? Well, I just can’t do that.”

Growing up, Fragomeni long wanted to become an RCMP officer—an uncle who was a fan of the Mounties encouraged her. So, when she graduated high school in Stony Plain, she enrolled in a 2-year police studies program in Medicine Hat.

After graduation, she worked at a St. Albert hospital for a year before joining the RCMP. The new career put her education on hold but not for long.

“I really wanted to finish my degree, but a lot of universities put a very short timeline on it,” she says. “With my shift work and everything else in life, that wasn’t for me.”

“I really wanted to finish my degree, but a lot of universities put a very short timeline on it. With my shift work and everything else in life, that wasn’t for me.”

Flexibility to return to school

AU allows students to further their education at their own pace and in their own home, without having to quit work or relocate. There’s a 6-month window to complete each course and only one course per year is required to stay in a program.

That unique model empowers thousands of Albertans to participate in higher learning while still contributing to the province’s economy and their communities: people who work in oil and gas, health care, agriculture, financial services and policing, among other sectors; who don’t have set hours or the ability to take time off; or who live and work in remote locations.

Fragomeni’s goal has been to take one course every 6 months, although she fell behind during her recent maternity leave. “My little boss at home didn’t really help out much,” she says.

At times, though, she could pick up the pace. When she was stationed in remote Red Earth Creek, for example, about a 4-hour drive north of Edmonton, she was living on her own and able to do a few classes each year.

The degree isn’t just to further her career; she has been able to apply her learning on the job, as the academic research on criminal justice evolves along with policing itself.

“I’ve taken many courses on mental health, for instance, which isn’t something we get a lot of training in,” she says. “Now I can see what I’ve read about, and it really helps me deal with people differently.”

She has also found that university-level study helped sharpen her communication skills, especially writing. “It’s a skill you can lose pretty easily in this job, and you end up talking like a police officer in everyday life. I don’t want that!”

Fragomeni is getting close to earning her degree—she has just 3 more courses to complete and expects to finish some time in 2024. But her academic journey is unlikely to end then. She might pursue a master’s degree, or perhaps take another course of study altogether.

“Once I get the degree, I think I’ll be pretty proud to see it hanging on the wall,” Fragomeni says. “But after that, I’ve got to figure out what’s next.”